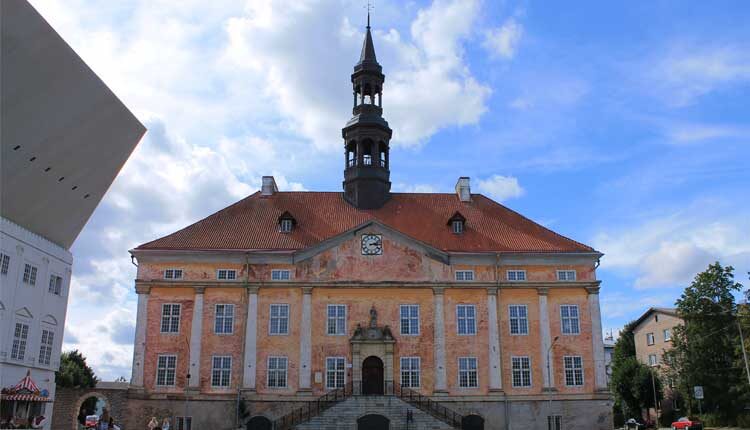 The old town hall is one of the most important historical landmarks of Narva. The former administrative building today neighbors with the modern building of the Narva College of the University of Tartu. The town hall is located only a few hundred meters from the Narova River embankment.

The initiative to build this administrative building belongs to the Swedish Royal Court. It was planned to be built in baroque style according to the project of G. Teifel, but the final sketch was changed in Stockholm and as a result the town hall of Narva was built in the style of Dutch classicism. Thus the city got a building with a mixture of German, Danish and even Italian culture.

Construction work on the Narva town hall started in 1668. The process was supervised by Jurgen Bischoff and Zacharis Hoffman the Younger. The building was completed in 1671 when a weathervane in the form of a crane was hoisted on the spire of the tower by craftsman Grabben. However, it took four more years to finish the interior.

The historical building was partially destroyed during the World War II in 1944. At the beginning of 1960s the Narva Town Hall was restored. The facades and portal, front stairs, exterior stairs with fences as well as interior rooms were restored.

Narva Town Hall in the photo

Originally, apart from the administrative building, there were other buildings on the Narva Town Hall Square, forming a single architectural ensemble together with the Town Hall. Here, in particular, there was a drugstore, a stock exchange office, and also houses of the richest noblemen of the city. However, during the World War II all these buildings were destroyed and later the authorities refused to reconstruct them.

A visit to the town hall

Today the town hall is closed to the public and again in need of restoration, but city officials say that very soon the necessary work will be done and the doors of the historic landmark will open to all comers.