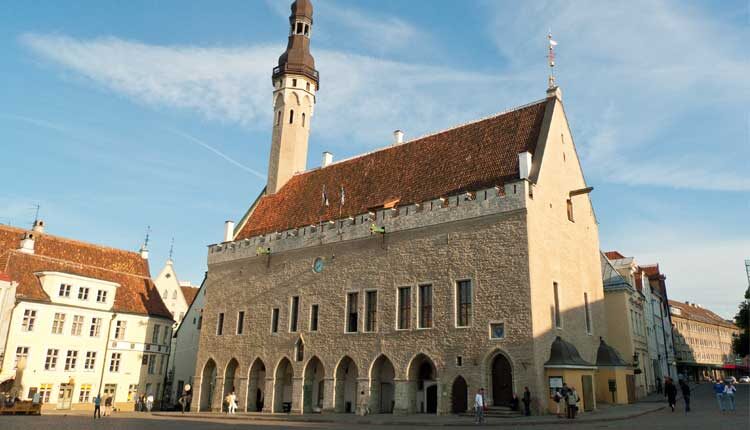 The Town Hall is one of the most famous historical sights in Tallinn, located in the Old Town. In medieval times it served as the main administrative building. The town hall was accessible only to the nobility, who solved issues related to the life of the city. Today the historic building is divided into several parts, some of which are still used by the city authorities and others function as a museum. In 2024 the Town Hall in Tallinn will celebrate its 620th anniversary.

The Town Hall of the capital of Estonia is considered the only building of its kind in Northern Europe that has remained virtually unchanged since the Middle Ages. The first mention of it dates back to 1322. At that time it was a small one-storey building made of limestone. By the end of XIV century commercial importance of Reval (i.e. Tallinn), which was a member of Hansa Union, increased significantly, as a result of which the administrative building had to be enlarged.

Today’s Tallinn Town Hall was built in 1402-1404. Then there were spacious halls for solemn events. In 1483 a 64 meters high tower was added to the building. In 1530 a weathercock in the form of a guardian was erected on its spire. The townspeople nicknamed him Old Toomas. Today this guard is one of the recognizable symbols of Tallinn.

In the future, the majestic building continued to acquire decorations. In 1627 city craftsman Daniel Pöppel made metal weirs in the form of dragon heads. These decorative elements are a typical example of the craftsmanship of Reval smiths working in the Middle Ages.

The town hall tower was partially destroyed during World War II, during the night bombing of March 1944, which was necessary to liberate Tallinn from the Nazis. But immediately after the war restoration work was carried out and the building was restored to its original appearance.

The doors of Tallinn Town Hall are open to visitors all year round. In the summertime anyone can climb the tower to admire the surrounding area. From the top there is a great view of Town Hall Square and its surroundings.

By the way, pay attention to the pillars of the old building. In the Middle Ages one of them was used as a “shameful”. The chains and shackles set in stone remind us of its past. They used to chain the hands of criminals, thereby preventing them from moving and exposing them to public view.

Sightseeing in the vicinity