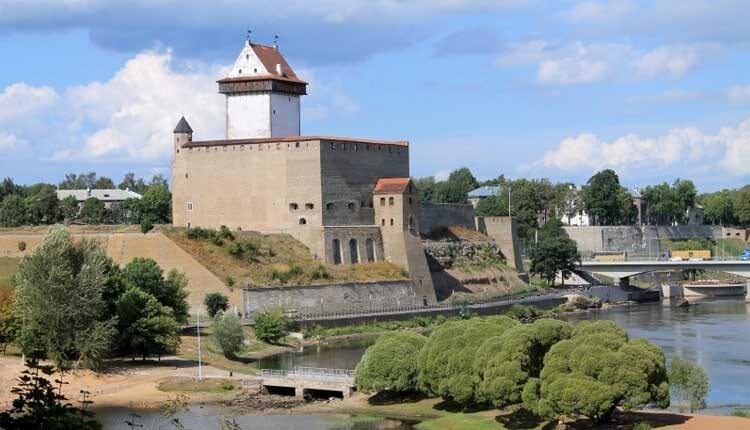 Herman’s Narva Castle is the main landmark of the Estonian border town. It rises above the river and forms a unique architectural ensemble together with the Ivangorod fortress. The exact date of the foundation of the settlement has not yet been established, however, according to historians, it acquired its current shape in the XIV-XVI centuries.

The territory of the Narva Castle is 3.2 hectares. The highest point of the fortress is the Long Herman tower (51 meters). At its top there is an observation deck that gives you the opportunity to admire the surroundings. The western courtyard of the fortress is used as a concert venue. It hosts performances by visiting groups, as well as city events and fairs.

History of the Narva fortress

The first written mention of Herman’s castle in Narva dates back to 1329. It is generally accepted that at the beginning of the 13th century, at the intersection of the Narva River with the “old road”, the Danes, who dominated the territory of present-day Estonia at that time, began to build wooden fortifications. Under their protection, Narva developed into a city that received privileges similar to those enjoyed by the city of Lübeck. The construction of the stone fortress began at the beginning of the 14th century.

Over the past centuries, the Narva fortress managed to be in the hands of the Danes, Germans, Swedes, until, finally, at the end of the Northern War, it became part of the Russian Empire. After its fall, the castle became the property of the Republic of Estonia, which still belongs to this day. Today it houses the Narva Museum, and the fortress itself has become one of the region’s tourist magnets.

The Narva fortress was badly damaged during World War II. Restoration work, which began here in 1950, has not yet been completed. For many years, Herman’s castle was open to the public at the same time as the Ivangorod fortress, but after the borders between Estonia and Russia were established, it is unfortunately not possible to visit both museums without passing through border control.

Today the Narva Museum works in the Hermann Castle. Its exposition introduces the history of the city and its surroundings. The museum’s exhibition focuses on the resort village of Narva-Jõesuu, located in the suburbs of Narva.

Among the exhibits of the museum there are ancient documents and items, including weapons of different epochs, found during archaeological excavations in the city and its surroundings. In addition, there is a photo exhibition in the fortress, which gives an idea of the development of the region in the last century and a half.

The Northern Courtyard of the castle is a unique place where the atmosphere of the 18th century is recreated with amazing accuracy. This peculiar “time machine” allows tourists to take a fascinating journey back 300-400 years. Life here follows the folk-church calendar with the observance of important historical traditions and with the obligatory performance of ancient rites.

In the Northern Courtyard of the Narva Fortress there are handicraft workshops. In addition, at the height of the summer season “wandering craftsmen” appear here, demonstrating their skills and ready to teach them to everyone who wishes. There is also a pharmacy with a range of medicines that were popular in the Middle Ages.

Hermann Castle on the map of Narva

It is possible to get on the territory of Narva Castle for free. However, in order to go up to the observation platforms, which offer a view of Ivangorod Fortress, and visit the interior of the historic fortification, you will have to buy a ticket. Museum in the castle is open daily from 10.00 to 18.00.