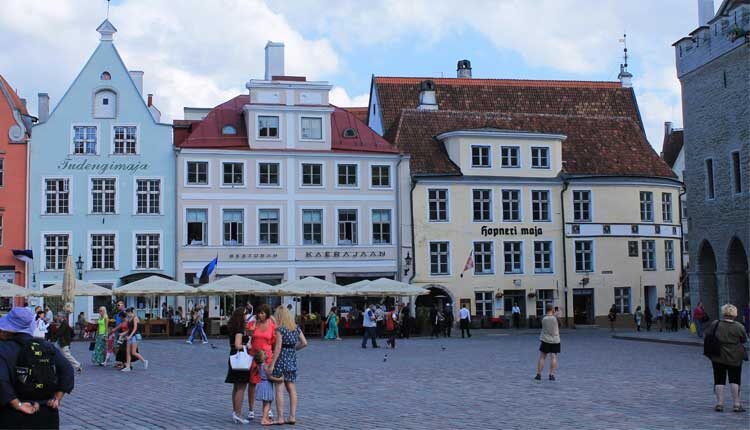 Town Hall Square is considered the center of Tallinn’s Old Town. Here is the town hall building, where in medieval times the city council met. Today the square is one of the main tourist spots of the Estonian capital. In summer there are numerous outdoor cafes, and in winter – the Christmas market. For entertainment lovers there are various performances and concerts.

Formation of today’s Town Hall Square in Tallinn took place in the period from XIV to XX century. During this time, along its perimeter were built buildings. Until the middle of last century, in the middle of the square there was the Weighhouse. During World War II it was destroyed, and at the end of hostilities the authorities decided not to rebuild the building for lack of use.

For centuries Tallinn Town Hall Square was a public place. A market was regularly held here, from time to time theatrical performances and performances of artists took place. In the Middle Ages, criminals were executed on the square, and a scaffold was erected there. The Great Market existed here until 1896.

Since 1441 in Tallinn was born the tradition to place a Christmas tree on Town Hall Square, which survives to this day. This century, the majestic tree decorated with festive lights appears in the center of the Old Town at the end of November or beginning of December and brings joy to citizens and guests of the capital till the Old New Year. Until then the Christmas market is usually open.

The main square of the Old Tallinn is in some ways a unique place. Only from here you can see five main spires of the capital of Estonia – the towers of the City Hall, Oleviste, Holy Spirit and Niguliste churches and the Dome Cathedral. To do this, you need to find a plate with the image of the Rose of the Winds in the bridge square. By the way, according to the legend, if you stand on this stone and see all of these spires, make a wish, it will come true. That is what the legend says!

The main attraction of Town Hall Square is the Gothic town hall. For history lovers is of interest also old pharmacy, which is the oldest operating in Europe.