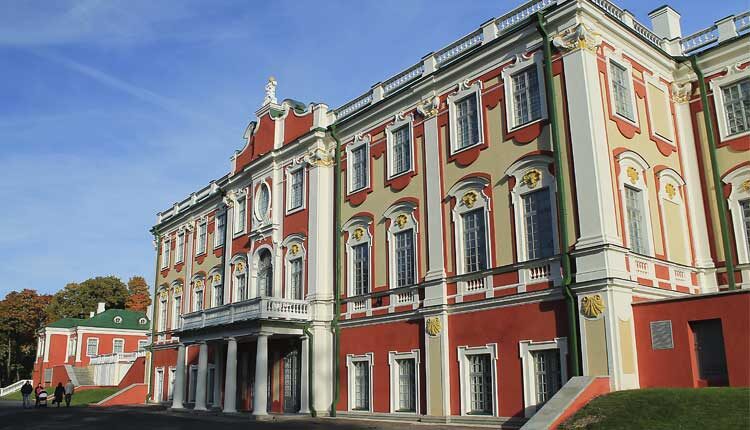 Tallinn’s Kadriorg Palace is one of the city’s most important landmarks. Its construction began in 1718 by personal order of Emperor Peter the Great. At that time, Reval was the summer residence of the Russian royal family. Today there is a museum of foreign art.

History of the Kadriorg Palace

The Kadriorg Palace was built by the Italian architect Niccolò Michetti. Summer residence was named in honor of the wife of Peter – Catherine I, though it did not sound like today. In Peter’s time the place was called Jekaterinental. The name was later changed to Kadriorg, which literally translates to English as “the valley of Kadri”.

It is known that Peter was actively involved in the construction of the palace. On one of its walls you can see the brickwork, made by the king. It is deliberately not covered with plaster and is on public display. The last visit the great autocrat made here was in July 1723.

Today the palace premises house a branch of the Art Museum of Estonia. Here are exhibited paintings by foreign artists. In fact, this is the only museum of foreign art in the country. In addition to its permanent exhibition, it often hosts exhibitions, as well as concerts, theater performances and scholarly lectures. In the backyard, a flower garden with fountains is open to the public.

During a visit to Kadriorg Palace it is recommended to pay attention to the plafond paintings and stucco of the front hall, which is two floors high. The room, which was occupied by the first president of the Republic of Estonia Konstantin Päts before the construction of the presidential residence next door, also deserves attention. Note that the Presidential Palace itself is closed to visitors, but this does not prevent you from admiring it from the outside.

Kadriorg Palace on the map of Tallinn

Interesting places to see nearby

In the neighborhood of the Kadriorg Palace are located several other museums. In particular the Peter the Great House Museum is located nearby, and in the house of the palace administrator today you can find the Castellan’s House Gallery and the museum of the Estonian writer Eduard Wilde.