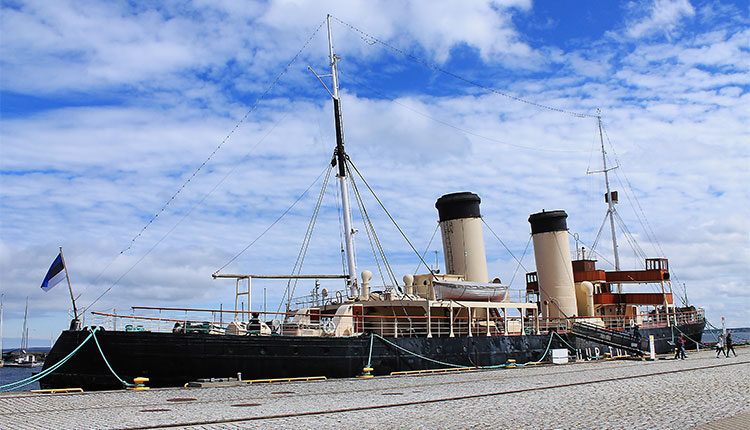 The steam icebreaker Suur Tõll is a legend of the Estonian Navy. In 2014, the historic ship turns 100 years old. For this significant date the ship was restored and opened to the public in June. Suur Tõll is an independent part of the Maritime Museum’s exhibition. Its mooring place is the pier of Seaplane Harbor.

Suur Tõll was built in 1914 for the 300th anniversary of the House of Romanov. Its home port was Reval, which is today’s Tallinn. Originally the icebreaker was called Tsar Mikhail Fedorovich, in honor of the ancestor of the Romanov dynasty, but after the October revolution and the establishment of the Soviet power it was renamed as Volynets.

In the spring of 1918 the icebreaker was sent to Finland to assist the Russian warships in their transfer to St. Petersburg. However, in the coastal waters of Helsinki it was seized by the Finnish White Guards, who later gave it a new name – Väinämöinen. Under Finnish flag, the ship was used for escorting German ships.

The newly formed Republic of Estonia received the icebreaker at the end of 1922. At the same time it was given its present name – Suur Tõll. It was named after a hero of national legends – a hero who lived on the Saaremaa Island. But in 1941, after Estonia was annexed to the Soviet Union, the ship was renamed again. This time it was renamed Volynets.

In Soviet times the home port of the icebreaker was the Lomonosov city. The ship remained in service until 1988, when they decided to discard it, as it could no longer compete with modern icebreakers. At that time, Estonian historians requested that the ship be returned to Tallinn, and in autumn 1988, the icebreaker reached its historical home port on its own. Today there is a museum on board.

Participation of the Suur Tõll in military operations

The steam icebreaker Suur Tõll was involved in military operations during both world wars. The ship was operated during the First World War and during the February Revolution. In March 1917 the crew of the ship went over to the side of the Bolsheviks.

During World War II, the icebreaker was again mobilized and even armed. In 1941 it was included in the Red Banner Baltic Fleet. Suur Tõll took part in the evacuation of the Soviet fleet from Tallinn to Kronstadt. During the operation called Tallinn passage in August 1941 in the area of Cape Juminda the icebreaker was attacked by the German bombers and was damaged.

Visit to the icebreaker Suur Tõll

Today the Suur Tõll is an attraction museum. The exhibit here tells the history of the ship through a permanent display made up of historical flags, a collection of photo and video documents and directly the interior of the ship, recreated from the original sketches and preserved photographs. On board there is a ship’s galley, where you can taste the dishes that were used to feed the ship’s crew in the olden days.

The icebreaker Suur Tõll is open to the public at the same time as the hangars of the Seaplane Harbor. You can visit it together with the main exhibition of the museum or separately. The Suur Tõll museum is open from 10 a.m. to 7 p.m., except on days when there are thematic events on board. The ticket is valid only on the day of purchase, photography and videotaping is allowed in all areas of the ship.