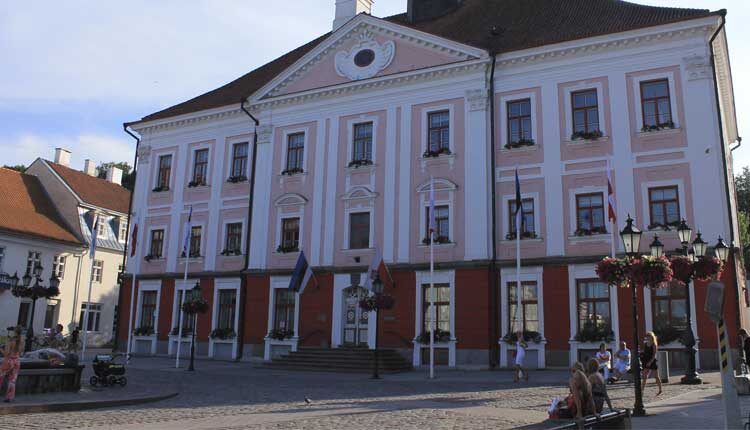 The Town Hall building is the main attraction of Town Hall Square in Tartu, Estonia. Previously, the main city market was located in front of it, but by today, the area has gained a different, more attractive appearance, becoming one of the tourist magnets. By the way, the current town hall building is already the third in a row. It was built in 1786.

The first Tartu Town Hall building was badly damaged during the medieval wars, so from 1642 the town office was located in the building of a pharmacy. In 1693, when the Swedish dominated Estonia, a new town hall was built. But during the Great Northern War it was destroyed, as well as the neighboring pharmacy.

Construction of the current town hall began after a large-scale fire in 1775, which destroyed many of the surrounding buildings. The architect of the building was Johann Walter from Rostock, Germany. The cornerstone was laid in 1782, and already in 1786 the town hall was ready. Frankly speaking, the inner decoration of the rooms continued for three more years.

The Tartu Town Hall building had always been multifunctional. In the XVIII century, the first floor of the building housed a prison and a shelter for the poor. Today there is a tourist information center. The Town Hall has had a pharmacy on the right wing since 1922, before that time it was a priory.

There are eighteen bells in the tower of Tartu Town Hall made in Karlsruhe, Germany. You can hear them ringing every day at 12, 18 and 21 hours. The square in front of the building is decorated by a fountain with a sculptural composition “Kissing students”, recognized as one of the recognizable symbols of the city.

Other Town Halls in Estonia