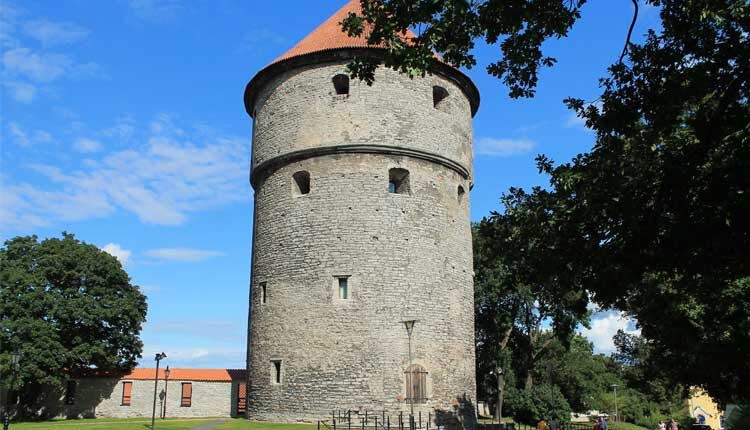 Kiek-in-de-Kök is a tower on Toompea in Tallinn’s Old Town. It is one of the fragments of the city fortress wall. Today there is a Fortifications museum here. From the tower you can also get into the underground bastion passages.

The tower was built in the period from 1475 to 1483. In chronicles of that time it was referred to as “New Tower behind the Boleman’s Tower”. The modern name was given to the building in 1577, so it began to be called by the people. However, the official name “Kiek-in-de-Kök”, which means “look into the kitchen” in German, was not assigned to the tower until 1696.

It was given such a mock name because of its height. The 38-meter cannon tower was indeed several times taller than all the surrounding buildings and the guards used to say that they could peep from it into the chimneys and kitchens of the neighboring buildings. Initially the tower fulfilled only defensive function, but in XVIII century the situation changed and it was used as a gunpowder warehouse.

It may be noted that during the Livonian War the Kiek-in-de-Kök Tower more than fulfilled its primary purpose. Even though Ivan the Terrible’s troops in the second half of the 16th century managed to break through a four-meter thick fortification, the tower still held its ground and withstood the onslaught of the enemy. To commemorate the attack, four cannon balls were embedded in its southeast wall, which can be easily seen from below.

The idea of creating a museum within the walls of the Kiek-in-de-Kök was born in 1930. However, a lot of time passed before its successful implementation. For the first time for the citizens and tourists museum doors opened in July 1958, and after a major renovation carried out in the 60s of last century, all the floors became part of the permanent exhibition.

Today, a visit to the Kiek-in-de-Kök Tower is also of interest thanks to the Bastion Underground passages, which have recently been restored. This is the name given to the system of tunnels running under Toompea Hill. In order to get under the ground, you must first register.

Kiek-in-de-Kök on the map of Tallinn