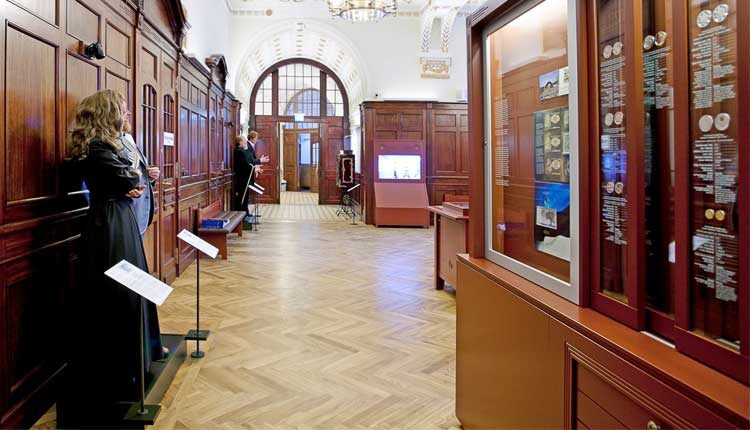 The Bank of Estonia Museum is located in the center of Tallinn, opposite the National Opera building, next to the Solaris shopping center. Its exhibition introduces the history of Estonian money, as well as the activities of the central bank. Visiting the museum is free of charge.

History of the building of the Bank of Estonia

Today the Bank of Estonia occupies the premises of the former Noble Bank. This building was built in 1904 at the request of the Estonian Nobility Credit Bank (Estländische Adelige Kreditkasse), which was founded in 1802. Almost the entire 19th century the Noblemen’s Bank was the leading financial institution of the Governorate of Estonia (1796-1917).

The museum is located in two rooms on the first floor of the building – in the former service rooms of the Noblemen’s Bank. Two separate entrances were used during the early years of the bank: nobility members of the nobility entered the bank through the door in the splendid head tower (now the museum entrance), while common people were let in through the (now extinct) door in a much more modest tower on the other side of the building.

The themes of the Bank of Estonia museum are money and economy. In addition to the history of Estonian money, the museum introduces the role of money in society and the activities of the central bank. The visitors can also visit the former treasury of the bank, where an exhibition on making money is located.

Video clips, games and virtual exhibitions inform visitors about the central bank’s activities in securing price stability. Other themes covered include borrowing and saving, the formation and management of central bank assets abroad, and economic analysis and forecasting. Simulation of card and Internet payment introduces the framework of payment transfer and the role of the payment systems managed by the Bank of Estonia in the payment system.

There is also a press conference room and a museum store in the museum complex where you can exchange Estonian kroons for euros, buy commemorative coins and buy museum souvenirs.