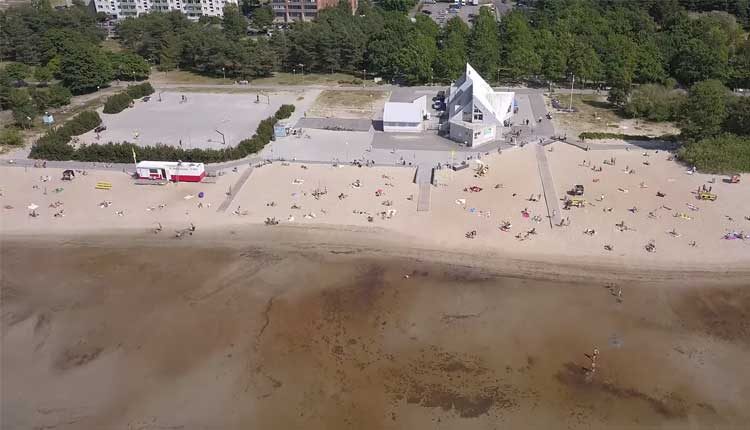 Stroomi beach is located in the northern part of Tallinn on the Kopli peninsula and is one of the most popular places for city residents to relax in the summer. The beach is adjoined by a large park of the same name, which has places equipped with everything you need for picnics, sports and children’s games. Holidaymakers at Stroomi can sunbathe and swim in the Baltic Sea.

Stroomi beach in Tallinn has a large sandy shore that stretches for a few kilometers from the promenade of Rocca al Mare to the park of the Living and the Dead. A small section of the beach on the side of the promenade is reserved for pets. In the central part of the beach no pets are allowed.

The center of the beach is located in the area of Pelguranna. Here are concentrated sports fields, designed for games of basketball, beach soccer and beach volleyball. There is also an administrative building, which has a cafe and rent chairs and other equipment. Catering outlets, offering mostly snacks, ice cream and soft drinks, also work in the coastal park during the summer.

Of the stationary attractions for children on Stromi Beach there is a large ship, as well as numerous climbers. Parents should remember that they are responsible for the safety of their kids and should not leave them unattended! Stationary equipment can be used year-round.

In the summer, at the height of the beach season on the beach Stromka also operates a rental of children’s bikes and electric cars. Rides are made by the children themselves along the asphalt paths of the park adjacent to the beach. These attractions are suitable for children of primary school age.

How to get to Stroomi Beach

Busses №42 (departs from Kaubamaja) and №43 (departs from the Baltic Railway Station) go to Stroomi Beach from the center of Tallinn. Get off at the Humala stop and follow the signs to the sea. This way you will reach the beach from the promenade of Rocca al Mare. You can get to the central part of Stroomi Beach from Tallinn city center by bus №40 that leaves from Viru bus terminal. Get off at the Randla stop.

The free parking lot for several tens of cars is located near the Paldiski mnt, near the prominent G4S building and the main building of the Port Hospital. A sign with the inscription RANNAPARKLA directs to the parking lot from the road. You can also park on the side of Pelguranna, near the main entrance of the beach. Both parking lots are not guarded.

What to see near the beach Stroomi

Not far from Stroomi beach there is a city race track, where you can watch the horses, a park of the Living and the Dead, where you can stroll in the shade of tall trees on a warm summer day. By the way, right from the park you can take a walk along the beach through Stroomi Park and the promenade of Rocca al Mare to the open-air museum. Also not far from the beach is the Tallinn Zoo.

At different ends of the beach are two major shopping centers of the Estonian capital. The first is Rocca Al Mare, which is located right across from the zoo. The second is in the Pelguranna district and is called Stroomi keskus.