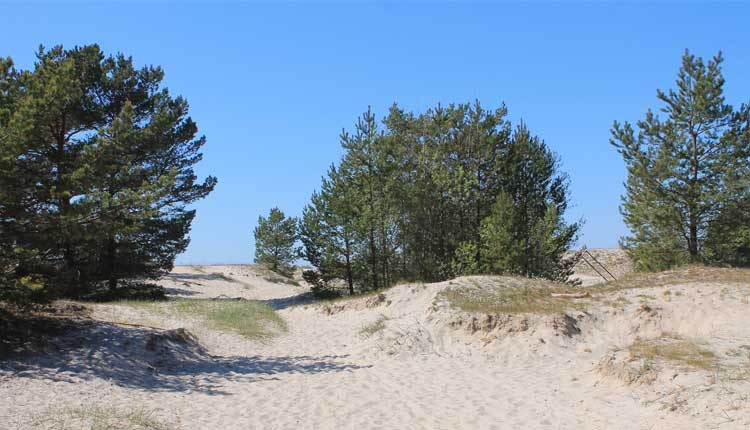 Kloogarand beach is located about 40 kilometers from Tallinn, near Paldiski, in the village of Kloogaranna. It is located in Lahepere Bay, which is an inland Gulf of Finland in the Baltic Sea. Administratively, the beach belongs to the Keila Municipality of Harju County.

Klooga Beach began to gain popularity as a recreational area at the end of the 19th century. Residents of the surrounding settlements came here to bathe and bask in the sun on the warm sand while breathing in the fresh pine air. Not far from the beach there is a forest belt, where in the summertime you can enjoy strawberries and blueberries.

The peak of popularity of Kloogarand beach was in the late Soviet period. In the summer of 1960 here was laid a railroad branch line and built a modern platform. The village of Kloogaranna quickly became a popular holiday destination, on peak days tens of trains consisting of ten or even twelve wagons arrived here.

An excellent infrastructure was created on the beach. There was a lifeguard station, a restaurant, a canteen and six kiosks that sold snacks, soft drinks and ice cream. There was a building at the main entrance to the beach, where there was a checkroom and a rent of beach amenities. On the beach were built playgrounds, equipped with sports fields and installed attractions.

Kloogarand beach is popular today among the residents of Keila, Paldiski and other nearby towns. For a long time it was in a state of neglect. But in 2020, the municipality decided to return the beach to its former glory.

Wooden paths were built here and the sand was sifted. During the summer, refreshments and snacks can again be bought on the beach. Sometimes concerts and festivities are held here.

How to get to Kloogarand?

You can get to Klooga Beach from Tallinn by train, which leaves from the Baltic Railway Station. Reaching the end, you should get off the platform and after passing a small crossroads, you will find yourself directly on the beach. The disadvantage of the route is a small number of trains on the line.

You can also get to the beach Kloogarand by train Tallinn – Paldiski. You should get off at the next station after Keila – Klooga-Aedlinn. After getting off the platform, you should cross the railroad tracks and go deeper into the forest, passing the memorial to the victims of the Klooga concentration camp and the lake of the same name.