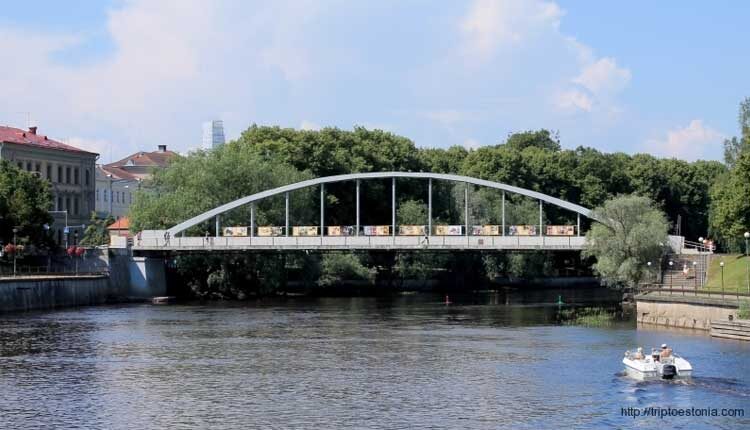 The Arch bridge over the Emajõgi River is one of the symbols of the Tartu city. It is also known as the Concrete Bridge and the Pedestrian Bridge. People also call it the Student Bridge, because many traditions of future doctors, philologists and representatives of other professions studying at the University of Tartu are associated with this place.

The Tartu Arch Bridge was built in 1957-1959 at the place where the old Stone Bridge once served as a crossing point. Today, all that remains of it is a nearby sculpture, and an information board describing the history of the extinct structure. Interestingly, the design of the bridge, resembling the current one, was developed in 1870.

The Arch bridge over the Emajõgi is made of reinforced concrete. Its width is 2.25 meters and length is 57.4 meters. The arch divides the bridge into two parts, thus forming two walkways. The maximum height of the arch is eight meters and its width is constant at one meter. In the spans between the columns that support the arch you can see banners with sketches from the history of Tartu.

Traditions related to the bridge

The bridge is very popular among Tartu students. For many of them, the arch that towers over the city has become one of their favorite places to spend leisure time. In the evenings, young people climb to the top to admire the view. It’s not uncommon to see two streams of students walking toward each other at the very top.

In the history of the Tartu Arch Bridge there are a few curiosities that have made the landmark known around the world. In October 2007, for example, a couple of students was seen making love on the bridge, and the pictures quickly spread across the Internet.

Another curiosity occurred in June 2010. Then at the top of the arch was seen a sleeping man, who was so drunk that he could not descend on his own. The rescuers, who were called to the scene and used a special hoist to rescue the drunkard, brought him back to the ground.

The address of the Arch Bridge:
Emajõgi River Embankment