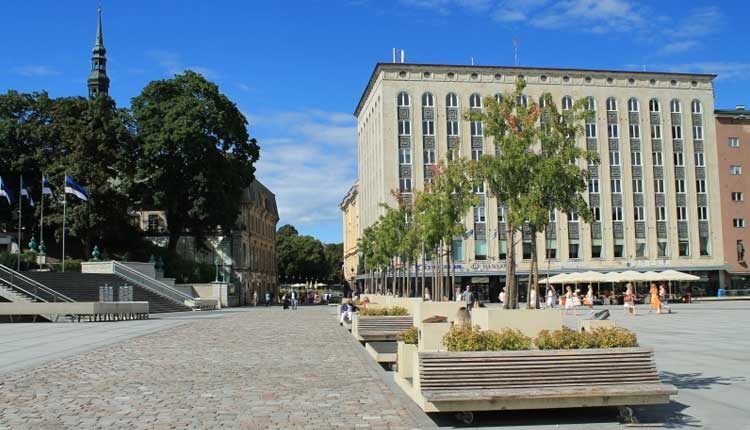 Tallinn’s Freedom Square is located in the heart of the city. Today it is a pedestrian area, completely free of cars. On national holidays festivities, military parades and concerts are held here. Also, various organizations often organize competitions in youth sports.

It is interesting to note that in the period from the XVI to XIX centuries, the territory of now Freedom Square was outside the city limits. The entrance to the city was through the gate, located at the beginning of Harju street. To this day they have not survived, and their remains were discovered during the 2008-2009 excavations, which were the most extensive reconstruction of this area in recent times.

For several centuries, Freedom Square was used as a marketplace. It was popularly known as the Hay market. The active construction period began in the XIX century. In that time Meyer’s stairs leading to the Kiek-in-de-Kök tower, St. John church, and other buildings that have survived until today, appeared there. The neighborhood of today’s Freedom Square was finally formed in 1933.

For most of the twentieth century the square was used as a parking lot. It was also the last stop for one of the city’s trolleybuses. However, in zero years city officials decided to completely update the square, to move the cars underground, and to give the free space to people. In 2008 the preparatory work began, during which the excavations were carried out and in 2009 the grand opening of the renewed Freedom Square took place.

A video introduction to Freedom Square

Variants of the name of the square

In 1910 the square was named after Peters plats. In its center was established a monument to the Russian Tsar Peter the Great, the opening of which was timed to the 200th anniversary of the victory of the Russian Empire in the Great Northern War, which resulted in the transition of the territory of modern Estonia to Russia. After the Republic of Estonia was established, however, the monument was dismantled. This happened in 1922.

The square received its present name for the first time in 1923. At that time it sounded as Vabaduse Plats. The name Vabaduse Väljak, as it is known to the people of Estonia today, appeared only in 1933. The next renaming of the square occurred during the Soviet era. In 1948 it was named after Victory. In 1989, on the wave of nationalistic moods the square regained the name of Freedom, which had been given back to it in the 30s.