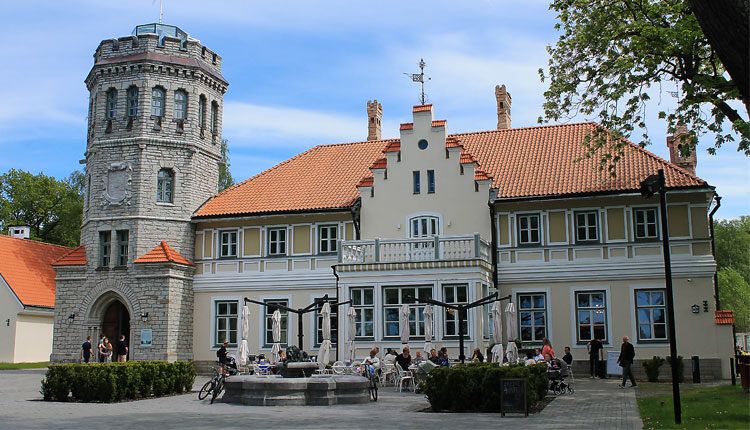 Maarjamäe Castle is an ancient manor house located in the Pirita district of Tallinn. It is also known under the historical names of Marienberg and Orlov’s Castle. A branch of the Estonian History Museum has been located here since 1975. The castle and its associated rooms are open to the public with tickets, while its courtyard can be visited for free. There is also a Film Museum on the territory.

The place where Maarjamäe Castle stands used to be called Strietberg and was considered a suburb of Reval. At the end of the 17th century Christian von Geldern, head of the town council and member of the Brotherhood of Blackheads, established a small manor house there. However, the area was not developed until 1811, when the land was purchased by the merchant Johann Gottlieb Clemens.

In the second decade of the 19th century a sugar factory was built here. Stone buildings, an icehouse, a blacksmith shop and a swimming pool with water channels for the factory workshops appeared on the territory. All this was surrounded by a four-meter high limestone fence.

In 1861 Christian Abraham Rotermann became the new owner of the site. He closed down production, turning the sugar factory into a trading warehouse. Later he built the first steam mill in Tallinn and opened a distillery here. But on March 19, 1869 a fire destroyed the factory and Rotermann stopped all activities here.

The new owner of the manor was Count Anatoly Orlov-Davydov from St. Petersburg. He gave the estate the name Marienberg, naming it after his wife. At the same time the castle, which has survived until now, appeared here. But after the revolution of 1917 Orlov-Davydov emigrated from Russia, of which Estonia was a part at the time, renting out his summer residence.

Maarjamäe Castle in the 20th century

The history of Maarjamäe Castle was continued in the times of the First Republic of Estonia. In 1933, a restaurant-hotel Riviera-Palais was opened here. In the same period, the name Marienberg was replaced by the Estonian-speaking Maarjamäe.

In 1937 the manor was bought by the state. The Military Flying School of the Republic of Estonia was opened here. The military rebuilt the historical building to suit their needs, eliminating the veranda and balcony of the front part of the castle and changing the appearance of the facade.

In 1940 the manor was taken over by the Soviet army. Communal apartments were built in the rooms of the castle and a store was opened on the first floor. In 1975 the manor became a property of the Historical Museum, and the restoration works were started in 1983.

The current exposition of the Historical Museum in Maarjamäe Castle opened in 2017. Today it is a full-fledged complex, introducing the history of the country through the symbols of different eras. There is an Alley of Soviet sculptures in the castle park, and most of the area is devoted to a children’s playground with a bird’s-eye view of a map of Estonia.

The main museum exhibition is called “My Free Country”. It occupies nine large halls, each of which introduces a different era of Estonia. The exhibition reflects the time from 1918 to 2018.