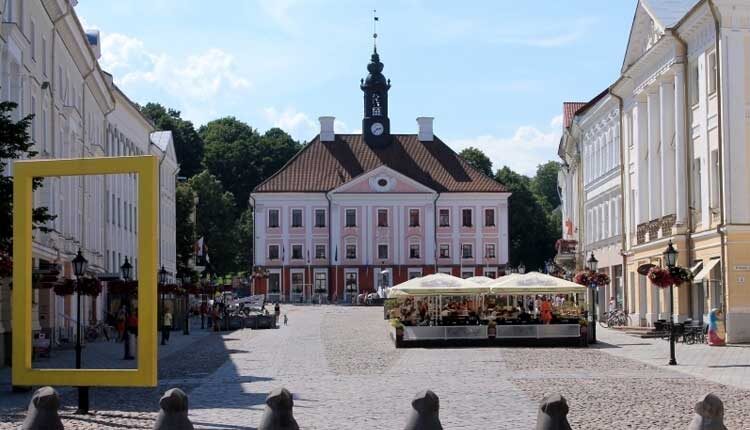 Town Hall Square (Raekoja plats) is the center of Tartu Old Town. It is a popular tourist spot, which is also loved by the locals. The square is built up with classic buildings and has a trapezoidal shape. In the summertime there are numerous outdoor cafes. The heart of the square is the building of Tartu Town Hall.

In the past there was a marketplace on the Town Hall Square, which the locals called the Big Market. This place became the center of the city already in XIII century. The boundaries of the square were marked by a stone wall, which was located on the side of the nearby Emajõgi River. There was a city gate with market buildings, and in the immediate vicinity of today’s town hall there was a two-story pharmacy, which functioned during the reign of the Livonian Order.

On the site of today’s town hall in the Middle Ages there were less significant buildings. There was also a gallows, where public executions of criminals took place. In addition, there was a public well on the square, where Tartu residents took drinking water.

The appearance of Tartu Town Hall Square has changed at least three times. In 1775, a fire damaged the buildings that surrounded the Market Square at the time. They were not reconstructed, but new houses for ordinary citizens and more respectable mansions for the town’s nobility were built instead.

During World War II, the southern side of Town Hall Square was severely damaged by bombing. The destroyed buildings were not rebuilt in their original form. Already at the end of the war there appeared buildings in the style of Stalinist classicism.

Sightseeing in the neighborhood

Among the sights around the square, the Tartu Town Hall, the fountain with a sculpture of kissing students, which has become one of the recognizable symbols of the city, and the Arched Bridge are especially worth mentioning. Across the road from the square runs the Emajõgi River. From here you can also get to the coastal park, which has numerous monuments to prominent people of Tartu and Estonia.

By the way, the entrance to Town Hall Square is preceded by a yellow window with the logo of National Geographic. This means that the authoritative international publication recognized Tartu as one of the 21 most remarkable places in Southern Estonia.