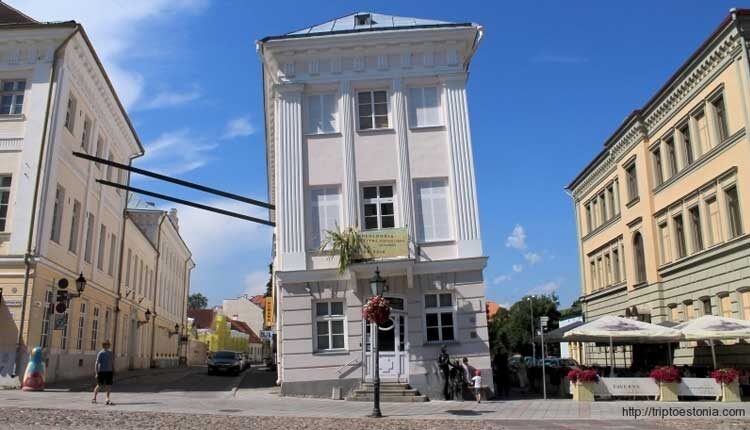 One of the attractions of Tartu Town Hall Square is the Leaning House (Croocked House). When you enter the square from the side of the Emajõgi River, this original building will be on the right side. Here is the Exhibition Hall of the Art Museum, and the building is called the Barclay House.

History of the Tartu Leaning house

The Leaning house of Tartu was built in 1793. At that time the medieval city wall was located near this building. It served as a support for the wall of the house on the side of the river Emajõgi. The second wall is based on long poles, which are supported by the wall of the neighboring building.

Locals call the Leaning House the Tartu Tower of Pisa. Other, no less common name is the Barclay’s House. The fact is that in 1819, after the death of the great general Barclay de Tolly, his widow bought this house and lived here for some time. In 1879 a pharmacy was opened in the building, where a well-known Estonian writer Oskar Luts served as a pharmacist in the early 20th century.

In the Exhibition Hall of the Art Museum of Tartu held regularly concerts and conferences. Here also held international seminars, which are attended by artists of different types of art. The rest of the time the gallery is open to all comers.

Tartu Art Museum exhibition hall was founded in 1988. The historic three-story building, which is very difficult to walk past, regularly hosts exhibitions of contemporary artists. In addition, there is also a permanent exhibition.

The address of the Crooked House in Tartu:
Raekoja plats 18, Tartu