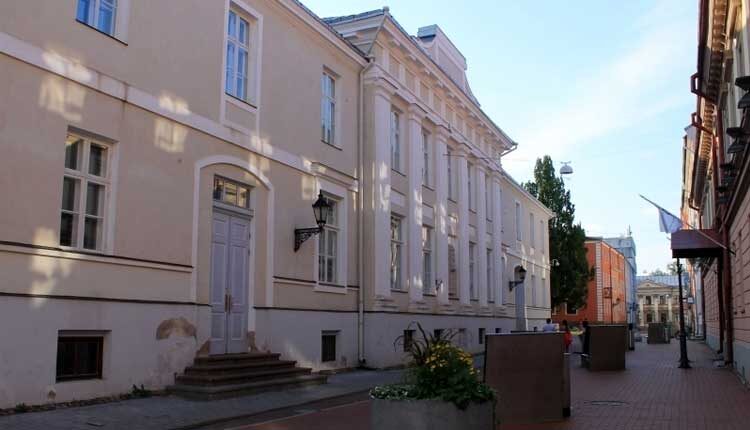 One of the most important architectural monuments in Tartu is the Hugo Treffner Gymnasium. It is located in the historic part of the city, in the Jaani quarter. This old building on Munga Street is also called Princess House, linking this name with its past.

History of the Treffner Gymnasium

The Treffner Gymnasium is considered the most attractive building of the Jaani Quarter. This majestic building, something resembling a real palace, appeared in Tartu in the XVIII century. It is known that in 1784 the house was the property of Princess Hedvig Elizabeth von Biron of Courland, thanks to which the building received its second name.

The state gymnasium was located on these walls in 1804. In 1830 on Rüütli street next to the Munga, was built a new building of the school that is today part of the Treffner Gymnasium. The author of the project was the architect Georg von Geist.

The history of the Treffner gymnasium began in 1883. It was founded by the well-known public figure school teacher Hugo Treffner. Initially the new school had only three lower classes, which were taught in German. From 1889 Russian became the main language of the school, and from 1890 there were eight classes. The gymnasium was named after Treffner only in 1907.

The gymnasium moved into the building on the corner of Manga and Rüütli Streets after the death of its founder in 1919. It was merged with another Tartu school, Alexander Gymnasium. In 1940, after Estonia was annexed to the Soviet Union, the gymnasium was renamed to the 4th Tartu Secondary School. In 1944 it was merged with the 1st Gymnasium of Tartu and became known as the 1st Secondary School.

Until 1954, Treffner Gymnasium was a so-called “boys’ school”. It became a mixed school under the influence of the new times. In 1958 the school was named after Anton Hansen Tammsaare. The historical name of the gymnasium was returned only in 1990. In 1998 the Treffner Upper Secondary School building was badly damaged in a fire, the effects of which were rectified during the restoration work that followed.

In 2008 the school celebrated its 125th anniversary and its museum was opened. Today the school, which is considered one of the best in Estonia, works here. The building of the gymnasium itself is one of the most important landmarks of Tartu. In memory of its founder, there is a bas-relief of him on the wall.