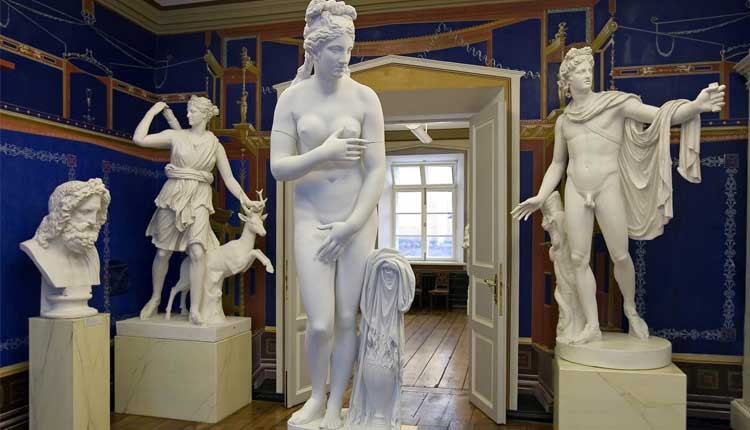 The University of Tartu Art Museum is located in the premises of the main university building. The permanent exhibition introduces the best works of Greek archaic, classical and Hellenistic art. One of the most valuable exhibits of the museum is an Egyptian mummy, which is up to 4000 years old. In addition, the museum regularly organizes temporary thematic exhibitions.

Permanent exhibition of the museum

The University of Tartu Art Museum exhibition consists of high quality copies of the best examples of ancient art. Plaster prints of sculptures are presented in their original dimensions. All the exhibits were brought here in 1860 from museums in England, Germany, France and Italy in order to promote students’ knowledge of art, history and culture.

The walls of the halls are decorated with ornaments in the style of Pompeii. The interior was created especially for this museum and is considered unique. The Pompeian paintings were painted in 1868, when the institution moved to its current location. The paintings are in lithographic technique based on drawings by the German artist Wilhelm Zahn, published in 1827-1859.

The museum also has a collection of original objects and a chamber of mummies that is unique in Estonia. Original Egyptian mummies can be seen here. Coins, vases, clay lamps and wedge-shaped boards are also on display.

History of the Museum

The University of Tartu Art Museum is considered to be the oldest art museum in Estonia. It was founded in 1803 and today its collection contains more than 30,000 items. Thus, it has the richest art collection in Tartu.

The founder of the University of Tartu Art Museum is considered to be Professor Johan Carl Simon Morgenstern. It was under his leadership that the collection began to be assembled here with the hope of making it large-scale and diverse. However, in the middle of the 19th century the orientation of the museum changed a little and the collection was dominated by works of antique art.

The museum was opened to all comers in 1862. Since then, Tartu residents and visitors have had the opportunity to admire engravings, coins, plaster casts of antique figures, ceramics and many other works of art. Exhibition halls in the left wing of the main building of Tartu University have been open since 1868.

Address of the Art Museum of the University of Tartu:
Ülikooli 18, 50090 Tartu
Official website: kunstimuuseum.ut.ee