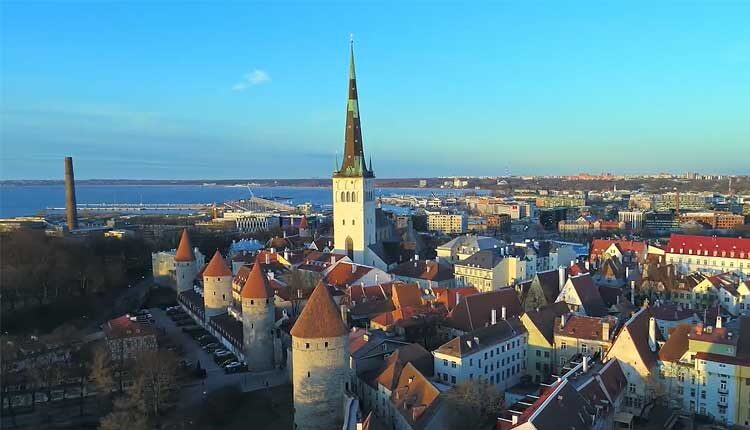 The St. Olaf’s Church (Oleviste kirik in Estonian) has long been considered the tallest building in Tallinn. Moreover, in the Middle Ages there were no buildings equal in height to it in the entire European area. The church also played an important role in the history of Estonia. The Reformation began in the city from here.

The building was originally built for the needs of the Catholic Church. It received its name in honor of the Norwegian king Olaf Haraldsson, who after his death was numbered among the saints. The first mention of St. Olaf’s church was in 1267. According to available data, at that time, its height was up to 159 meters, and the spire, towering above the other houses of Old Tallinn, served as a kind of reference point for sailors.

The metal spire repeatedly attracted lightning. As a result, the church burned to the ground three times, but was inevitably rebuilt. It is known that the glow from the fire was visible even from the shores of neighboring Finland.

The most extensive reconstruction of the St. Olaf’s Church building was done in the XV century. In the course of its reconstruction, new choirs were built, the longitudinal part was renovated as well, and eventually it was turned into a basilica with four-sided columns. In the middle of the 16th century, the chapel of the Virgin Mary was added to the church.

The present height of Oleviste Church is 123.7 meters. According to existing rules in Tallinn, any new building in the city center can not be higher than the spire of this temple. The last large-scale reconstruction of its walls took place after a fire in 1830. The interior furnishings of the church date back to that time.

St. Olaf’s Viewing platform is located at the 60-meter height of the medieval church. It is unique in that it offers a panoramic 360 degree view of Tallinn. The top deck is the only place where you can see the Old Town in the palm of your hand as well as watch the cruise ships leaving the port of Tallinn.

Admission to the viewing platform is paid. You can buy tickets at the ticket office, located at the entrance. To get to the top, you must climb a narrow spiral staircase with staircases of different heights. The ascent will be very difficult, but the result is worth it. By the way, it is believed that on a clear sunny day you can see the contours of the capital of Finland – Helsinki.

Finally, we want to pay attention to another remarkable event in the history of St. Olaf’s Church, reported by chronicler Baltazar Russow. In particular, he described how in 1547 in Tallinn came traveling circus artists, who stretched a rope between the tower and the fortress wall, on which they began to perform dangerous tricks.

Oleviste Church on the map of Tallinn