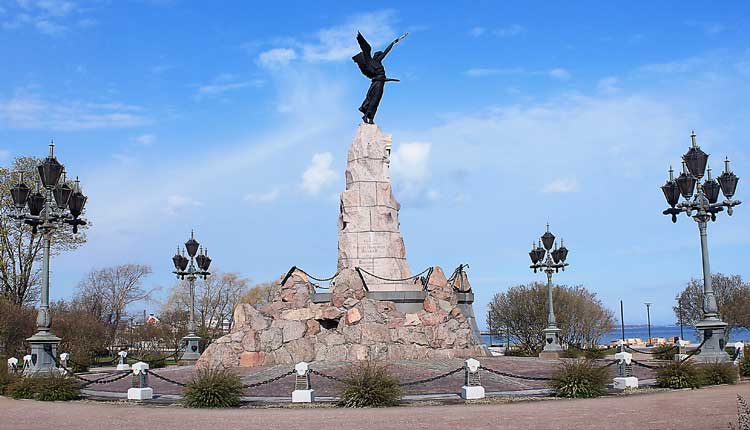 The Rusalka Memorial at the beginning of Pirita Promenade is one of the most beautiful monuments in Tallinn. It commemorates the Russian battleship of the same name that sank near the Finnish coast. The shipwreck happened on September 7, 1893, 177 crew members died.

History of the Rusalka Memorial

The idea to perpetuate the memory of the dead sailors appeared in 1900. At that time an appeal to compatriots with an appeal to collect money for the erection of a monument in honour of heroes appeared in the Reval newspapers. According to the preserved documents the cost of all works connected with the creation and installation of the monument was 67 159 roubles and 61 000 roubles were collected by the donators.

Monument’s author was Estonian sculptor Amandus Adamson. The memorial consists of a granite pedestal made in the form of the prow of the ship, and a granite rock, on top of which stands a sculpture of an angel holding a gilded cross in his hand, pointing it in the direction of the place where the battleship sank. Adamson’s maid, Juliana Rootsi, a 17-year-old native of Hapsal (now Haapsalu), was the model for the angel figure. The total height of the monument reaches 16 meters.

The area in front of the monument is fenced with massive chains. They are attached to stone posts on which are placed plates with the names of the lower ranks of the crew of the battleship who died. The platform, located on a pedestal, is reached by a stone staircase. Here is a bronze bas-relief, depicting a ship in a stormy sea, and carved the names of twelve dead officers. Around the monument there are ancient lanterns.