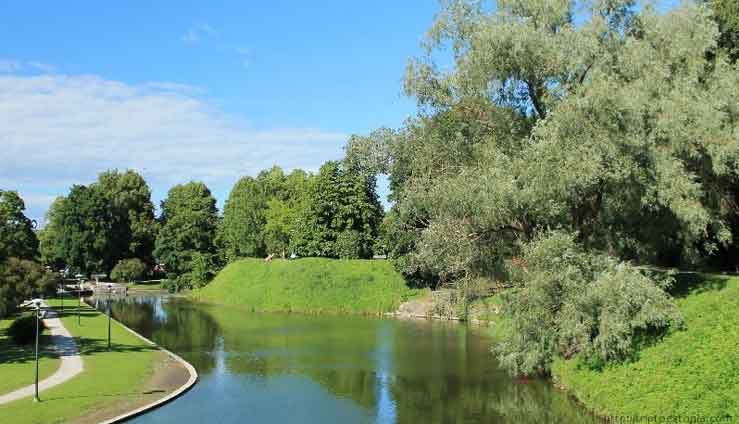 Toompark is one of the most suitable places for walks in the center of Tallinn. It is located opposite the railway station, right at the foot of the fortress wall. The park is the border between the tourist mecca – Old Town – and the center of business life. It is also known as Snelli Park.

Toompark is formed on the site of the ancient earth fortifications of Snelli pond. This pond is the only surviving part of the castle moat system. It was named after the gardener named Snelli, whose house was located nearby in the 19th century.

Already in the XX century, the park was turned into a fashionable attraction. The Toompark was designed by the architect Anton Soans. He also suggested installing a small fountain near the bus stop.

In 1903 in the park was built Patkuli staircase, which connects Toompea hill with Lower Tallinn. At the top of the stairs is an viewing platform, which offers a view of the sea coast and the Old Town. Here also stands the Stenbock House, the seat of the Estonian government.

The central part of Toompark is Snelli pond, which is surrounded by walking paths. You can start your walk from the Patkuli Stairs and return to it in a circle. The road ring is not closed, you can leave its limits at any point of the path.

Toompark offers an unusual view of Toompea Castle and the fortress wall of Tallinn. From here you can see the colorful houses standing on the rock. In the neighborhood is a soccer stadium.

In one part of Toompark there is a monument called “Resting”. It is a sculpture of a man lying in the grass. Not far from it is a park fountain.

What else to see nearby