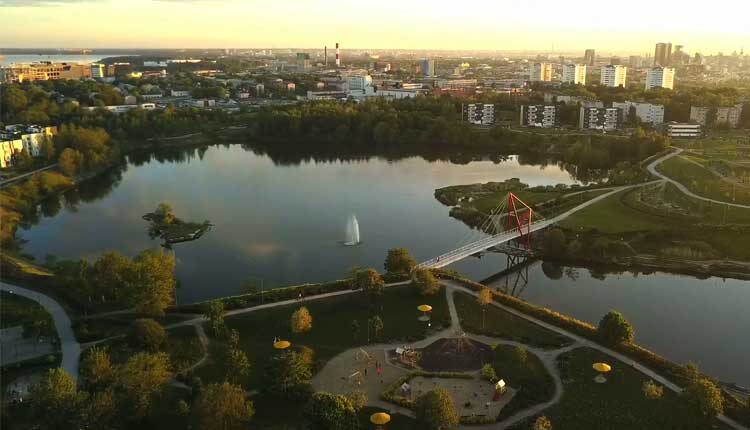 Pae Park is located in the largest district of Tallinn, Lasnamäe. Its total area is 22 hectares, of which 8 is a water area. The park is laid out on the territory of a former limestone quarry. It was opened in 2009.

Until the mid-60s of the twentieth century, the territory of the current Pae Park was used as a quarry. Limestone was extracted here, which was used in the construction of many buildings in the Estonian capital. The walls of the famous Laagna Tee road, which runs through the whole of Lasnamäe, were made of this material.

After the quarry was closed down, the area was left abandoned. A new habitat started to form here, trees grew up and birds settled in. The pond formed in the middle of the former quarry attracted fishermen and teenagers who wanted to go for a swim.

The lack of infrastructure over time began to pose a danger to city residents. In the 1990s, asocials gathered at the former quarry. From time to time there were accidents here.

In 1996, city officials made a fundamental decision to begin developing the area. Planning and construction of the park continued for several years. It was opened in 2009, and in 2011 the district council finally approved the name of both the park and its pond.

The structure of the Pae Park

Lasnamäe Pae Park consists of three small thematic zones. Each of them has a different function. Thanks to their diversity, it is possible to hold concerts, bird watching and family recreation here.

The family zone of Pae Park is designed for a quiet outdoor recreation. There is a children’s playground, also equipped with special equipment for children with disabilities. In this part you can sunbathe and have picnics.

The summer theater of the Pae Park is designed for public events in the open air. Street performances, movies, and concerts are held here. The events are usually organized by the district government and admission is free.

The Nightingale zone of the park is an oasis of nature. In this place you can listen to birds singing. At the edge of the park there is a playground for children from 8 to 13 years old. There is also an observation tower 4 meters high.

Who lives in the Pae Park?

As mentioned above, the Pae Park is home to a large number of birds. The local pond is a favorite among mute swans, mallards, coots, Tufted Ducks, mute gulls and lake gulls. The nightingale zone is home to songbirds. These include nightingales, robins, wood warblers, warblers, and others.

As in the old days, Pae Pond continues to attract fishing enthusiasts. In 2014, 350 specimens of mirror carp were released into the pond. However, the local fishermen most often caught carp.

Other parks in the city