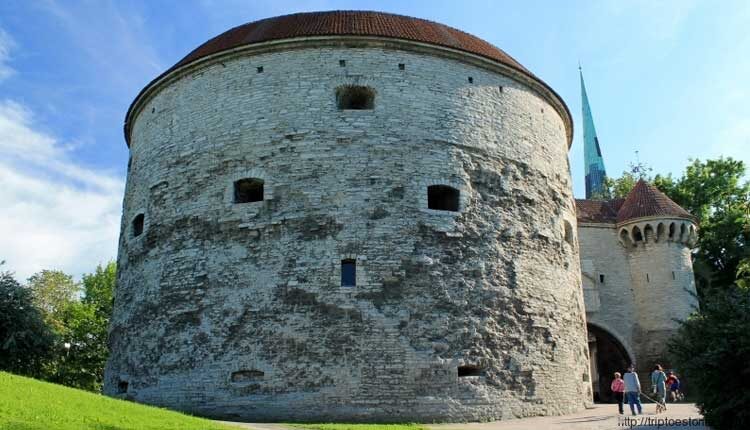 The Fat Margaret Tower and the Great Sea Gate are important landmarks of Old Tallinn. In the old days, sentries used to keep watch here, ready to sound the alarm if they saw an enemy approaching from the sea. Today within the walls of the tower is a Maritime Museum, and on its roof is an viewing platform and cafe.

The Great Sea Gate at the end of Pikk Street appeared in the fourteenth century. Originally they had a defensive function. The gate on this site was built in the 15th century between 1448 and 1460. Next to it, two stately towers were erected, which gave the construction resemblance to the Viru Gate.

Construction of the Armory Tower, known today as the Fat Margaret, began in the 16th century. In 1518 – 1529 the third stage of the reconstruction of the gatehouse sections took place, during which it was decided to build the current landmark on the site of the former Rose Garden. The structure stood out for its imposing dimensions: the tower reaches 25 meters in diameter and 20 meters in height. The thickness of its walls varies from 4.4 to 6.5 meters.

The tower is known by its present name since 1842. Before that it was known simply as the New. At various times the tower was used as an armory, as well as a gunpowder warehouse. In 1830 it was used as a prison.

The modern history of the tower

After the Republic of Estonia was proclaimed, Fat Margaret Tower was under the supervision of Ministry of Defence (1918-1922), the Ministry of Education (1922-1923), the Ministry of Science (1923-1932). In 1938-1940 the former prison premises of the tower were reconstructed and given to the Tallinn City Museum. The next reconstruction of the interior of the building took place in 1978-1980.

In 2019, the museum’s Fat Margaret exhibit was completely renovated. Interactive exhibits appeared here, allowing you to experience sensations comparable to those experienced by real sailors. In particular, here you can stand at the helm of the ship on the captain’s bridge, weather the storm and much more.

The gem of the renewed exposition is a medieval ship’s hulk. Its remains were discovered during the construction of Reidy Tee Street, the pedestrian part of which became an extension of the Pirita Promenade. Also open to visitors is the ground floor, where you can see ancient walls and fragments of the sidewalk.

Fat Margaret on the map of Tallinn

Other museums in Tallinn