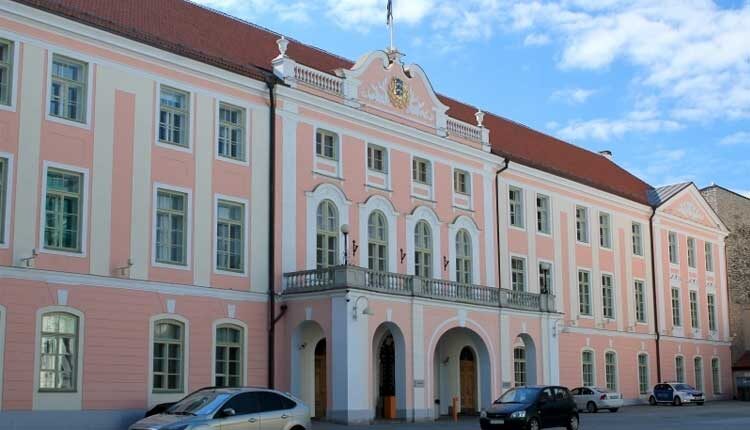 The Estonian Parliament (Riigikogu in Estonian) is the supreme representative and legislative power of the republic. Its functions include debating and adopting laws, as well as controlling the executive power, which in the state is considered the government. The Riigikogu also elects the president of the republic. The Parliament of Estonia consists of 101 members. According to the Estonian legislation the name of the legislative body in all the languages of the world is called Riigikogu.

Session Hall of the Parliament of the Republic of Estonia

The Riigikogu meets in a beautiful building, the walls of which are painted in pleasant pink. The main entrance to Parliament has a balcony, above which there is a bas-relief in the form of the national coat of arms of the Republic of Estonia, above which the flag of Estonia flies 24 hours a day. In front of the building there is a small square, which is used as a parking lot for members of parliament.

Riigikogu meeting room is located in the southern wing of Toompea Castle. Estonian parliament building is considered unique because it is the only one of its kind, made in the expressionist style. In architecture of the building you can discern two directions: traditionalism and expressionism of the 1920s. Externally it looks traditionalist – it is an undivided structure with several small openings in the facade.

Order of visiting the Estonian Parliament

Excursions to the building of the Estonian Parliament are organized, introducing both the work of the state assembly and Toompea Castle. Tours usually do not exceed 40 minutes and the maximum number of people in a group is 35. Tours are given on weekdays from 10 a.m. to 4 p.m. in Estonian, English and Russian. During the visit to Parliament with a personal identification document is necessary.

Parliament Building on the map of Tallinn