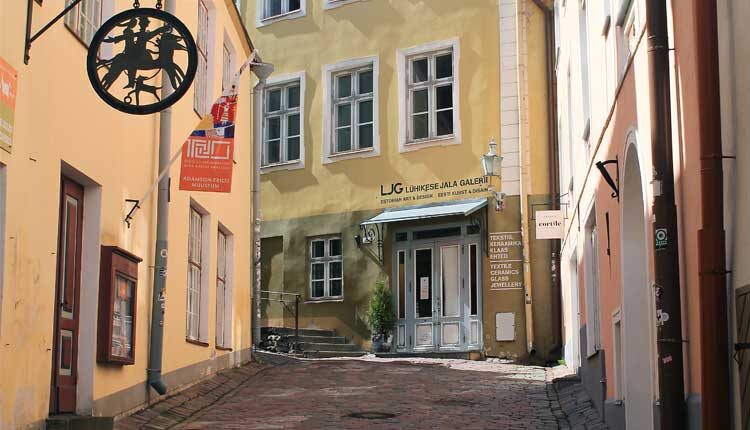 You may have heard that Tallinn is called the “lame city”. This is due to the fact that in its historic center there are two streets – Pikk Jalg and Lühike Jalg, which in English means “long” and “short” leg respectively. Both are now entirely pedestrian zones, both have important historical significance.

The first mention of Lühike Jalg Street (Short Leg Street) dates back to 1353. However, at that time it was called “Short Mountain”. Since 1371 the name “Small Hill” came into use. In historic documents, drawn up in Latin, the name of the street in literal translation sounds like “the slope of the mountain toward the sea”. The modern name of the street was first pronounced in 1732.

The main attraction of street Luhike Jalg is one of the two surviving towers in Tallinn. It is located at the intersection with Pikk Jalg street, at the very top of a long staircase. It is worth noting that the second tower is located at the beginning of Pikk Jalg street. In the Middle Ages there were gates that were locked tightly after nine o’clock in the evening, and their main purpose was to provide security for burghers who were afraid of knightly arbitrariness.

The street Lühike Jalg also has a symbolic meaning. Each year on May 15 the capital opens Old Town Days, the beginning of which is marked by the meeting of the Prime Minister, playing the role of a representative of “komtur Toompea”, with the Mayor of Tallinn. The minister knocks at a locked city gate and asks to be let into the Lower Town, to which the mayor answers as well, unlocks the gate and then they go down together to greet the people.

You can get to Lühike Jalg Street from Rataskajevu Street, famous for having the world’s only monument to a water well. “Short Leg” serves as a link between Lower and Upper Tallinn. Today it is a long narrow staircase along which souvenir shops operate. In medieval times the atmosphere here was different and instead of stores selling beautiful trinkets there were butcher shops.