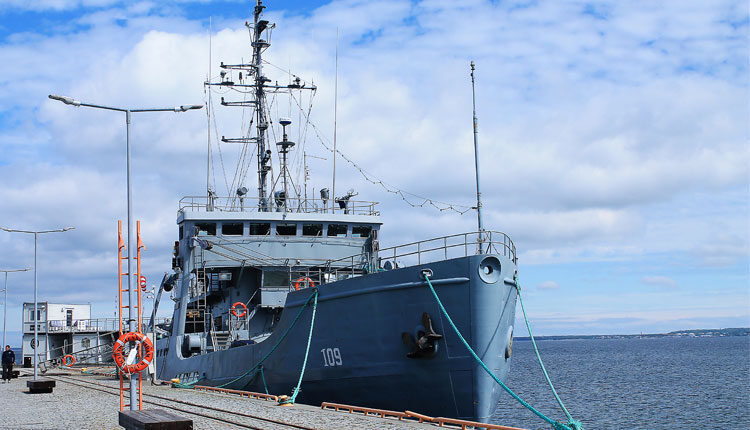 Valvas is a warship-museum in Tallinn. It is docked at the quay of Seaplane Harbor. Available for viewing with a single ticket to the Maritime Museum or with a comprehensive ticket that entitles you to visit the steam icebreaker Suur Tõll.

History of the Valvas warship

The frontier ship Valvas was built in 1943 in the United States at the Zenith Dredge Company shipyard. The ship was originally used as a hydrographic ship. Until 1976, the ship carried out frontier service off the coast of Alaska, where, among other things, it carried out scientific work.

The original name of the ship was Bettersweet. Its present name was given to it in 1997. At that time, as part of the US Navy modernization program, the ship was presented to Estonia.

Before the ship crossed the Atlantic Ocean, the Estonian crew underwent a two-week training in America. The ship sailed to Estonian shores on its own. The national flag of the Republic of Estonia was flying on board.

After enlisting in the Estonian Navy, the ship was renamed Valvas. The ship was used as an icebreaker in Pärnu Bay and also as a training ship and even as a staff ship. Besides that, it provided a ceremonial meeting of the presidents of Poland and Estonia Alexander Kvasniewski and Lennart Meri.

Museum on board the ship

In 2014, the Valvas border ship was handed over to the Estonian Maritime Museum. It can be viewed from the outside as well as the inside. All you have to do is climb the gangway on board.

The deck and interior rooms are open for viewing on board. You should be careful when moving around the ship, as the deck can be slippery. Here you will see the onboard equipment, including rescue equipment.

From the interior, the sickbay cabin and the wardroom are open for viewing. After seeing them, you can go up to the captain’s bridge. Here you will see the ship’s control panel. The ascent is by a very steep staircase.

Other places of interest