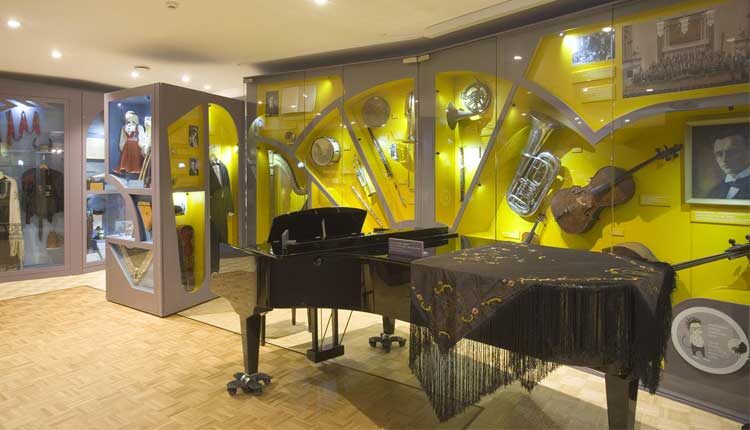 Estonian Museum of Theater and Music

Estonian Museum of Theater and Music shows visitors the culture of the country. Its exhibition consists of two parts. One of them tells about the life of theater and the other is devoted to music. The institution is a branch of the Estonian History Museum.

History of the Theatre and Music Museum

The Estonian Theatre and Music Museum was founded in 1924. The initiator of its appearance was the Estonian artist and collector August Pulst. The basis of the exposition was the heritage of composer Peeter Süda (1883-1920), more precisely the recordings of Estonian folk music and his collection of musical literature and sheet music.

The museum is located in the old Assauve Tower and in the building attached to it. It moved into these premises in 1934. Initially its exposition told only about the history of Estonian music, but after the establishment of the Society Theatre Museum in 1937, these two institutions merged. The basis of the theater collection is the legacy of actor and director Heino Vaks (1886-1943).

Peculiarities of the museum exposition

The musical part of the exposition tells about the history of this side of Estonian cultural life. It contains materials about famous performers, conductors, composers and other important figures of this kind of art. There are also documents that reflect the activities of choirs, orchestras and various societies. Composers’ manuscripts take a special place in the exposition.

The theatrical exposition consists of sketches of costumes and decorations, director’s books, program sheets of different years and historical photographs. In addition, videos of many theatrical performances can be rented from the museum. There is also a solid library with themed prints including books, newspapers and magazines.

Visitors will be interested to see a collection of musical instruments and jukeboxes. A special place in the collection is occupied by the “Piggy Boy” machine, which is powered by a clockwork mechanism. There are thematic exhibitions in the stairwell of the museum.

Music and Theatre Museum on the map of Tallinn