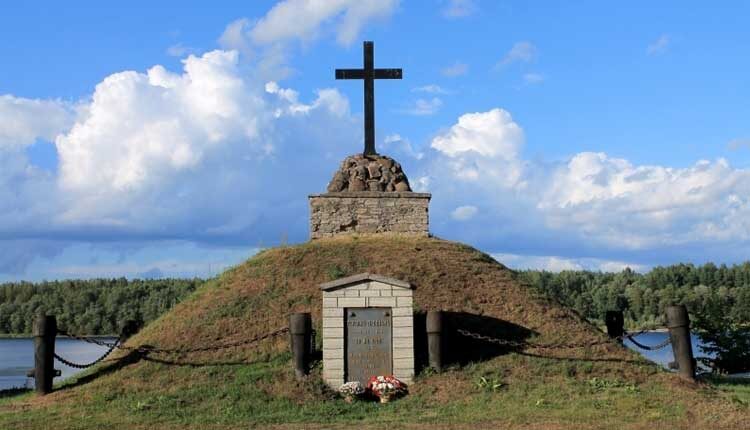 On the road from Narva to Narva-Jõesuu, just behind the cemetery of the Narva garrison, on the bank of the Narva river rises a high mound with a metal cross on it. This is a monument to the Russian soldiers who died in the battle in 1700. People call it simply: Monument in Siivertsi, referring to the place of its installation.

History of the monument to Russian soldiers

The monument was established in honor of the Guards Semenovsky and Preobrazhensky regiments of Peter the Great’s army, who fought against the Swedes in the famous Battle of Narva on November 19, 1700. The battle was of great importance for both the Russian and the Swedish armies, because at stake was not only the possession of the territories, but also access to the sea. At that time fortune smiled on the troops of Karl XII.

A monument to the Russian soldiers in Sivertsi was erected in 1900. Its opening was timed to coincide with the 200th anniversary of the memorable battle. The memorial was designed by Colonel A. Zeyfert. It was built using funds of the Preobrazhensky and Semyonovsky regiments of the Life Guards, and the 1st battery of the 1st Artillery Brigade of the Life Guards. In 1944 the memorial was partially destroyed in the war. In its present form it was restored in 1956.

Description of the monument

The monument is a mound, on the perimeter of which ten ancient guns are dug down at the muzzles. The guns are connected by a massive chain. At the top of the hill of limestone is a small pedestal, on which are placed granite boulders, which serve as a base for the metal cross.

How to get there?

The best way to get to the monument in Siivertsi is by private transport. When leaving Narva, take Jõesuu street in the direction of Narva-Jõesuu. The monument is located near the cemetery Siivertsi on the right side of the road. There is a place for parking next to the monument.